All Interclub competitions are administred through iSquash.

All captains are required to familiarise themselves with the Interclub Bylaws (below).  Players are also encouraged to read the by-laws to ensure a smooth running of the competition and help avoid unnecessary breaches and potential penalties.


How to enter Interclub results 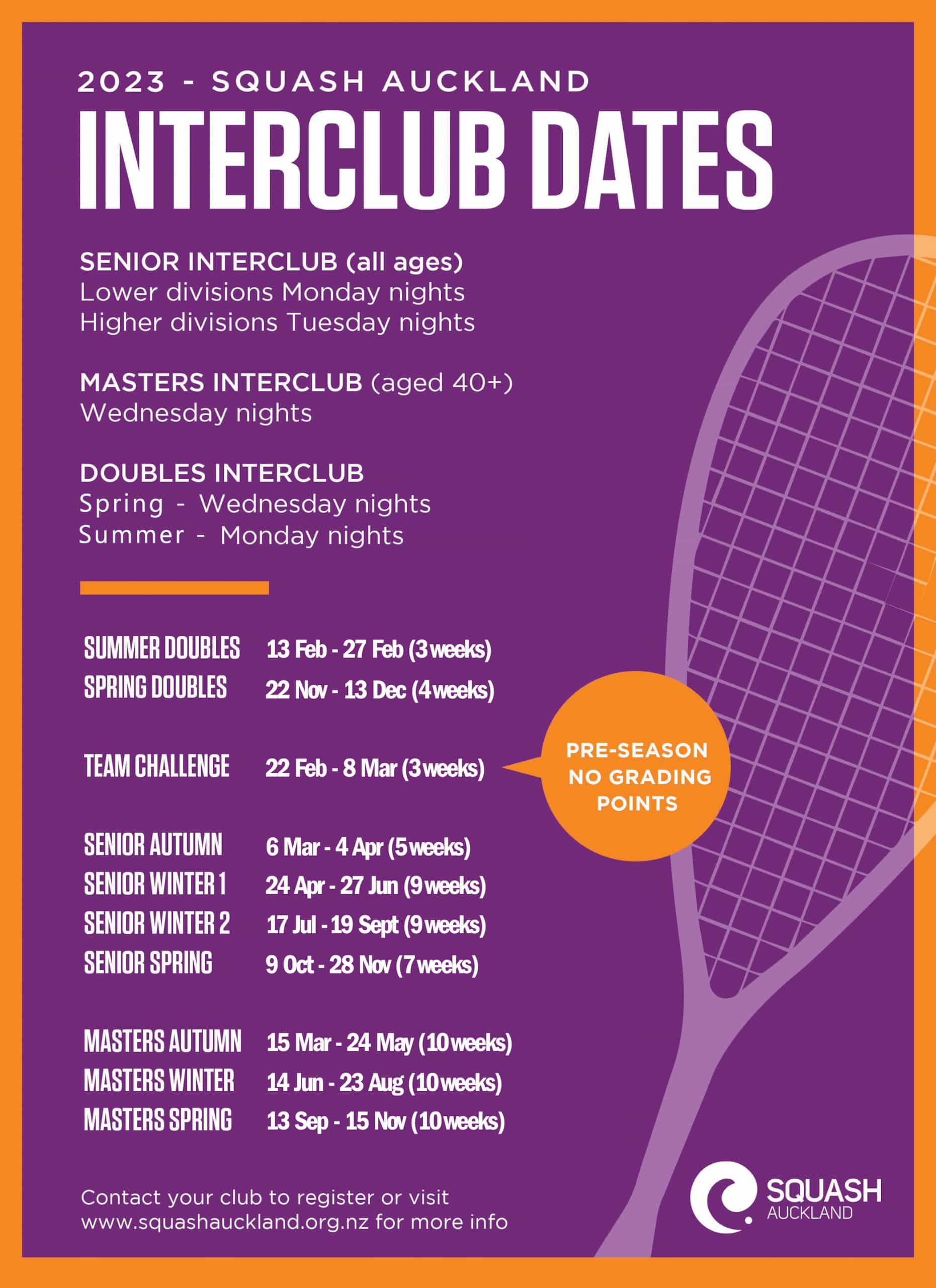 Team playing order - Rule 5(g)
With regard to team playing order, players must play in points order as per the team list within iSquash on the day of the fixture.   Both team captains must declare their teams and agree on the order prior to the commencement of the first match.

Late Registrations - Rule 5 (h)
A late registered player’s grading list points must not exceed the average points of the top 5 players in the top ranked team of the division. The points limit will be recorded on the team lists page of the Squash Auckland website.

Ball - Rule 6 (d)
Where a B2 graded (or higher) player and a C1 (or lower) graded player meet in competition play (including where a man plays a woman), the player with the highest grading points shall have the choice of which ball is used.

Refereeing - Rule 6 (j)
Each interclub match must have a scorer and referee (one from each team) adjudicating.  Proficiency is expected by team members of all grades and Squash Auckland recommends that clubs ensure all of their interclub players have completed and passed the Squash NZ online Club Referees Exam

Defaults - Rule 6 (k)
Eevery effort must be made to complete a scheduled fixture.  Allowances are made for the rescheduling of fixtures as per Rule 6(l)(i), and any rescheduled fixtures must be approved by the Interclub Committee and completed PRIOR to the last scheduled round of the competition.

If a fixture cannot be rescheduled, it is the Team Captain’s responsibility that a team which may only be able to field two or three eligible players is still expected to complete the fixture on the scheduled night or face the default penalty as per rule 6 (k)(i).  This includes all Senior Winter playoff matches.

Where members of a team collectively default (i.e. no team members attend a contest), regardless of the notice given to their opposition, the following penalties will apply;

Protests - Rule 8 (a)
In the event of a dispute arising over the playing of any contests a ‘protest’ must be submitted by email to interclub@squashauckland.org.nz from the team protesting within 7 (seven) days of the result being loaded online and submitted.

Host clubs must appoint a competent Controller prior to each night's play, who will be responsible for the following:

As a Team Member
Interclub is a social, team-based competition.  All team members are expected to socialise with fellow team members and opposition, mark and referee, stay for supper after each fixture and contribute to the supper for home matches.   All players must treat each other equally irrespective of age, gender, or grade, and must adhere to the Squash Auckland Code of Conduct at all times.

Junior Players
Junior players competing in Senior Interclub accept they are playing in an adult competition, and are expected to behave as a regular team member in all ways as outlined above.

As the Host Team
The home team is required to provide supper for both teams at the end of the night.  This does not need to be a full meal, but be considerate of your opposition and ensure a balance is struck so they do not leave hungry.  The best approach is to communicate plans with your opposition prior to the fixture.

Adhering to the Code of Conduct
All players competing in the Auckland Interclub competition agree to adhere to the Squash Auckland Code of Conduct, which can be found at www.squashauckland.org.nz.

Proficiency in Refereeing
All players are expected to be proficient in refereeing and marking matches within their own division.  Players are strongly encouraged to attempt and pass the Online Club Referee Exam before participating in any organised competition - http://nzsquash.co.nz/survey/training.cfm

Entering Teams
Only Club Managers are authorised to enter teams online. Please ensure you contact your Club Manager/person in charge of entering Interclub Teams if you are interested in playing Interclub.